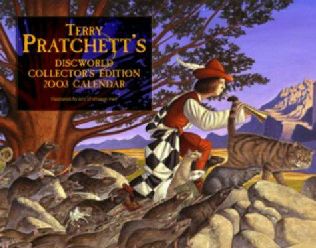 Josh Kirby has illustrated the jacket of every single one of Terry Pratchett's 25 Discworld novels. He also provided the interior illustrations for the hardcover and trade paperback editions of Pratchett's Discworld novella Eric. As well as an illustration to every month - two previously unpublished and a number rarely seen before - the calendar includes both Real World and Discworld dates.