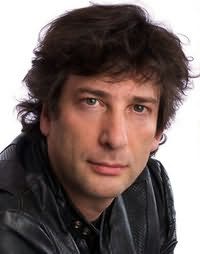 He is also the author of books for readers of all agesincluding the #1 bestselling and Newbery Medal winning novel THE GRAVEYARD BOOK,the bestselling novels CORALINE and ODD AND THE FROST GIANTS; the short storycollection M is for MAGIC and the picture books THE WOLVES IN THE WALLS, THEDAY I SWAPPED MY DAD FOR TWO GOLDFISH, and CRAZY HAIR, illustrated by Dave McKean;THE DANGEROUS ALPHABET, illustrated by Gris Grimly; and BLUEBERRY GIRL, illustratedby Charles Vess.

He is the winner of numerous literary honors, includingthe Hugo, Bram Stoker, and World Fantasy Awards, and the Newbery Medal. Originallyfrom England, he now lives in America.

Series contributed to
Babylon 5 : Episode Novelizations
Day of the Dead (1998)

Doctor Who : Eleventh Doctor
Nothing O'Clock (2013)

The Devil's Own Dear Son (1949)
James Branch Cabell
"[He] is a delightful author.. I like the sheer audacity and the scope [of his work]."

Dreams of Sex and Stage Diving (1994)
Martin Millar
"I've been a fan of his work for almost twenty years."

13 Phantasms (2000)
James P Blaylock
"Blaylock is a true one-of-a-kind original and a short story collection from him is a cause for celebration and rejoicing."

The Music of Razors (2001)
Cameron Rogers
"A nightmarishly imaginative debut from a writer of real assurance and vision... Cameron Rogers is going to go places."

Pattern Recognition (2002)
(Blue Ant Trilogy, book 1)
William Gibson
"PATTERN RECOGNITION is William Gibson's best book since he rewrote all the rules in NEUROMANCER. Gibson casts a master extrapolator's eye on our present, and shows it to us as if for the first time."

The Wraiths of Will and Pleasure (2003)
(Wraeththu Histories, book 1)
Storm Constantine
"I wouldn't swap her for a dozen Anne Rices!"

Finding Helen (2003)
Colin Greenland
"His prose is as flexible and dangerous as a rapier...his stories go for both the head and the heart'"

Low Red Moon (2003)
Caitlín R Kiernan
"A gift for language that borders on the scary."

The Neddiad (2007)
(Neddiad, book 1)
Daniel Pinkwater
"It's funny and tender and strange and impossible to describe. What Pinkwater does is magic and I'm grateful for it."

The Secret History of Moscow (2007)
Ekaterina Sedia
"A lovely, disconcerting book that does for Moscow what I hope my own Neverwhere may have done to London."

Little Brother (2008)
(Little Brother, book 1)
Cory Doctorow
"A wonderful, important book…I’d recommend Little Brother over pretty much any book I’ve read this year, and I’d want to get it into the hands of as many smart thirteen-year-olds, male and female, as I can. Because I think it’ll change lives. Because some kids, maybe just a few, won’t be the same after they’ve read it. Maybe they’ll change politically, maybe technologically. Maybe it’ll just be the first book they loved or that spoke to their inner geek. Maybe they’ll want to argue about it and disagree with it. Maybe they’ll want to open their computer and see what’s in there. I don’t know. It made me want to be thirteen again right now, and reading it for the first time."

Half World (2009)
(Half World, book 1)
Hiromi Goto
"Half World is a haunting combination of a coming of age novel and a spiritual quest, a mad funhouse of horrors and a tale of redemption and love. Wonderfully odd and quite unforgettable."

Luka and the Fire of Life (2010)
Salman Rushdie
"A beautiful book... It's like a bridge built between generations, fabulous and strange and from the heart."

Queen of Kings (2011)
Maria Dahvana Headley
"So magical, so dark... a powerful work of the imagination, stalking the murky, dangerous territory between Anne Rice's Queen of the Damned and Robert Graves' I, Claudius."

The Buried Giant (2012)
Kazuo Ishiguro
"The Buried Giant does what important books do: It remains in the mind long after it has been read, refusing to leave, forcing one to turn it over and over ... Ishiguro is not afraid to tackle huge, personal themes, nor to use myths, history and the fantastic as the tools to do it. The Buried Giant is an exceptional novel."

Rabbit's Bad Habits (2016)
(Rabbit and Bear, book 1)
Jim Field and Julian Gough
"Send your Children to bed early so you can read it to them."

How to Stop Time (2017)
Matt Haig
"Matt Haig has an empathy for the human condition, the light and the dark of it, and he uses the full palette to build his excellent stories."

You Should Come With Me Now (2017)
M John Harrison
"M. John Harrison moves elegantly, passionately, from genre to genre, his prose lucent and wise, his stories published as SF or as fantasy, as horror or as mainstream fiction. In each playing field, he wins awards, and makes it look so easy. His prose is deceptively simple, each word considered and placed where it can sink deepest and do the most damage."

The Year's Best Dark Fantasy & Horror 2017 (2017)
Paula Guran
"Paula Guran is the grey eminence behind the world of horror. She is the secret mistress of the genre. Listen to her."

Finding Baba Yaga (2018)
Jane Yolen
"Jane Yolen is a phenomenon: a poet and a mythmaker, who understands how old stories can tell us new things. We are lucky to have her."

Black Leopard, Red Wolf (2019)
(Dark Star Trilogy, book 1)
Marlon James
"Black Leopard, Red Wolf is the kind of novel I never realized I was missing until I read it. A dangerous, hallucinatory, ancient Africa, which becomes a fantasy world as well-realized as anything Tolkien made, with language as powerful as Angela Carter's. It's as deep and crafty as Gene Wolfe, bloodier than Robert E. Howard, and all Marlon James. It's something very new that feels old, in the best way. I cannot wait for the next installment."

The Migration (2019)
Helen Marshall
"Helen Marshall uses the fantastic to pry her way inside her readers ribcages and break us wide open."

The City We Became (2019)
(Great Cities Trilogy, book 1)
N K Jemisin
"A glorious fantasy, set in that most imaginary of cities, New York."

Night Train (2020)
David Quantick
"David Quantick is one of the best kept secrets in the world of writing. He's smart, funny and unique. You should let yourself in on the secret."

D (A Tale of Two Worlds) (2020)
Michel Faber
"Glorious. There is such personal and political outrage about the world. But what makes it feel like a Real Story, one that will be found and enjoyed and dreamed about for years to come, is D and a real person on the page. Her adventure and bravery as she attempts to restore a missing letter to the world is beautifully written and delightfully told. I loved it."
Visitors to this page also looked at these authors
Terry Pratchett
George R R Martin
Patrick Rothfuss
Brandon Sanderson
Stephen King
Terry Goodkind
Robin Hobb
Terry Brooks
Joe Abercrombie
Joe Hill
Mercedes Lackey
Jim Butcher
Deborah Harkness
Raymond E Feist
Robert Jordan
Andrzej Sapkowski