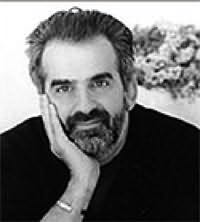 (b.1943)
Son of William Saroyan
Aram Saroyan is an American poet, novelist, biographer, memoirist and playwright. There has been a resurgence of interest in his work in the 21st century, evidenced by the publication in 2007 of several previous collections reissued together as Complete Minimal Poems. He is the son of author William Saroyan and actress Carol Grace Marcus.
Novels
Cheated Death By Inches (1964)
Cloth (1971)
Street (1974)
The Romantic (1988)
Still Night in L.A. (2015)

The Grave Gourmet (2010)
(Capucine Culinary Mystery, book 1)
Alexander Campion
"The witty and beautiful Paris police investigator, Capucine LeTellier, takes us on a tour of her fabled city the likes of which we've never known. This is an astonishing debut that raises the bar on today's detective novel."