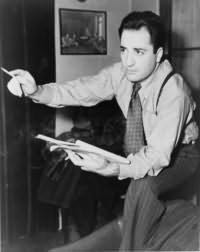 (1908 - 1981)
Father of Aram Saroyan
William Saroyan was an American - Armenian author. The setting of many of his stories and plays was Fresno, California (sometimes under a fictional name), the center of Armenian-American life in California and where he grew up.
Saroyan was born in Fresno, California to Armenian immigrants from Bitlis, Turkey. At the age of three, after his father's death, Saroyan was placed in the orphanage in Oakland, California, together with his brother and sister, an experience he later described in his writing. Five years later, the family reunited in Fresno, where his mother, Takoohi, secured work at a cannery. He continued his education on his own, supporting himself by taking odd jobs, such as working as an office manager for the San Francisco Telegraph Company.

Saroyan decided to become a writer after his mother showed him some of his father's writings. A few of his early short articles were published in Overland Monthly. His first stories appeared in the 1930s. Among these was "The Broken Wheel", written under the name Sirak Goryan and published in the Armenian journal Hairenik in 1933. Many of Saroyan's stories were based on his childhood experiences among the Armenian-American fruit growers of the San Joaquin Valley, or dealt with the rootlessness of the immigrant. The short story collection My Name is Aram (1940), an international bestseller, was about a young boy and the colorful characters of his immigrant family. It has been translated into many languages.