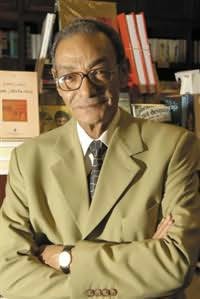 Egypt (b.1935)
Bahaa Taher was born in 1935 in Cairo and published his first short story in 1964. Bahaa was active in the left-wing and avant-garde literary circles of the 1960s and was one of the writers of the Gallery 68 movement. A storyteller and social commentator Taher lost his job in radio broadcasting and was prevented from publishing in the mid 1970s in Sadat's Egypt.

In 1981 he chose to leave for Geneva to work as a translator for the United Nations. After many years of exile in Switzerland, he has returned recently to Egypt and is very active in all cultural circles. He has received much recognition in the last five years. Apart from the translation into English of two of his novels, his collected works were published in Cairo by Dar al Hilal in 1992, and a film was made about him as a leading member of the 60s generation by Jamil 'At iyyat lbrahim in 1995.
Novels
Aunt Safiyya and the Monastery (1996)
Love in Exile (2008)
As Doha Said (2008)
Sunset Oasis (2009)