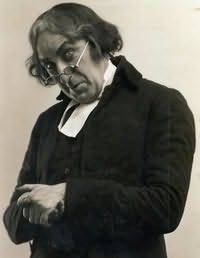 (1885 - 1972)
Arthur Russell Thorndike (6 February 1885, Rochester, Kent 7 November 1972) was a British actor and novelist, best known for the Doctor Syn of Romney Marsh novels. Lesser known than his sister Dame Sybil Thorndike but just as versatile, Russell Thorndike's first love was for the pen and, following service in World War I, he devoted himself to writing.
He was born in Rochester, Kent, where his father had recently taken the position of canon at the cathedral. A student at St George's School, Windsor Castle, he was a chorister of St George's Chapel, an experience he later recounted in his book Children of the Garter (1937). At his suggestion, both he and Sybil (who once aspired to be a concert pianist) tried acting as a career in 1903. They became students at Ben Greet's Academy and two years later accompanied fellow members of the company on a North American tour, which included New York. He remained three-and-a-half years with the company, once giving three performances as Hamlet in three different versions of the text on the same day. He also toured in South Africa and Asia.