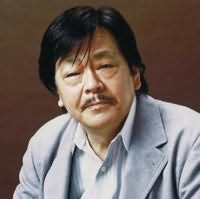 Japan (b.1934)
Born in Osaka, Yasutaka Tsutsui is particularly well known for his science fiction. After graduating from Doshisha University, he founded NULL, a science fiction magazine. His short story O-tasuke (Help) won him the recognition and respect of Rampo Edogawa, the father of Japanese mystery writing . In 1970s Tsutsui began experimenting in a variety of styles, from slapstick and black humour to various kinds of metafiction. Winner of various awards including Izumi Kyoka Prize, Kawabata Prize and Yomiuri Literary Prize.
Novels
Hell (2007)
Paprika (2009)
The Maid (2010)
The Girl Who Leapt Through Time (2011)

The Lonesome Bodybuilder (2018)
Yukiko Motoya
"I was impressed by how each story has a different idea, none being mere variations on a theme. It's not a book to consume in one sitting. Read carelessly and you run the risk of ending up flat on your back with no idea of what just hit you. It dawned on me that in these pieces, Motoya, already well-known for theater, was trying to achieve in fiction the gamut of what can't be done on stage. Reading this made me want to sit down and get to work. This is a collection that is provocative to writers as well."
Visitors to this page also looked at these authors
Tad Williams
Chris Roberson
Arthur Porges
James Patterson
Lisa Black
Stanley Schmidt
Eric Brown
Lisa Unger
William Barton
Ian Creasey
Robert Dugoni
David Langford
Rhys Hughes
Patrick O'Leary
Jack Womack
Jessica Q Fox