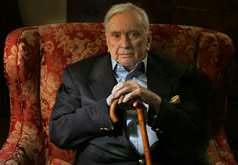 aka Edgar Box, Katherine Everard, Cameron Kay
Gore Vidal was born in 1925 at the United States Military Academy at West Point, and brought up in Washington, D.C. He enlisted in the army at the age of seventeen and served as first mate on an army ship in the Bering Sea, where he wrote his first book, Williwaw. In the sixties, three praised novels established Vidal's reputation as a bestselling author: Julian (1964); Washington, D.C. (1967); and Myra Breckinridge (1968). His collected essays, United States, won the National Book Award in 1993. In 1995 he published a memoir, Palimpsest, which the Sunday Times called 'one of the best first-person accounts of this century we are likely to get'.

Vidal died at his home in Hollywood Hills, California on July 31, 2012.

The Magic Christian (1959)
Terry Southern
"Terry Southern is the most profoundly witty writer of our generation."

City Of Night (1963)
John Rechy
"One of the few original American writers of the last century."

Those Who Walk Away (1967)
Patricia Highsmith
"One of the most interesting writers of this dismal century."

Funeral Games (1981)
(Alexander the Great , book 3)
Mary Renault
"One of the centuries most unexpectedly original works of art."

The Nehrus and the Gandhis (1985)
Tariq Ali
"A fascinating and clear-cut account of an exotic world and family like no other."

Oranges Are Not the Only Fruit (1985)
Jeanette Winterson
"The most interesting young writer I have read."