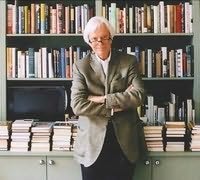 Abbott started as a copywriter at Mather & Crowther and then at DDB, London. In 1966, he was sent to their New York office, then returned to London as a director.

In 1971, he founded French Gold Abbott. In 1978, he founded Abbott Mead Vickers (AMV), handling clients including Volvo, Sainsbury's, Ikea, Chivas Regal, The Economist, Yellow Pages, and the RSPCA.In 1991, BBDO acquired a stake in AMV and appended their name.