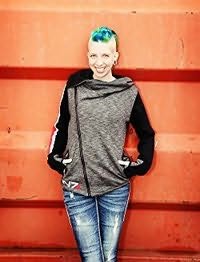 She champions mental health awareness and prefers animals to people. And she writes anything she wants to.