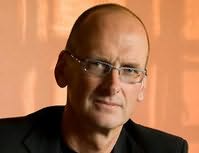 Canada (b.1957)
Born in Port Edward, British Columbia, author David Bergen worked as a writer and high school English teacher in Winnipeg, Manitoba, before gaining a great deal of recognition in Canada when his novel The Time In Between won the 2005 Scotiabank Giller Prize, one of Canada's most prestigious literary awards. The novel also received a starred review in Kirkus Reviews and was longlisted for the 2007 IMPAC Award.

Additionally, Bergen has received the 1993 John Hirsch Award for Most Promising Manitoba Writer, and the 2000 Canadian Literary Award for Short Story.

In 2008, he published his fifth novel, The Retreat, which was longlisted for the Scotiabank Giller Prize, and which won the McNally Robinson Book of the Year Award and the Margaret Laurence Award for Fiction.

Bergen currently resides in Winnipeg, Manitoba with his family.

Falling (2008)
Anne Simpson
"This is a tender and wise novel; a remarkable story of love lost, and then found."