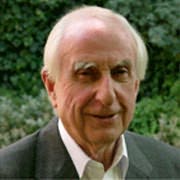 (1926 - 2017)
Michael Bond was born in Newbury, Berkshire, England on 13th January 1926. He was educated at Presentation College, Reading. During World War II he served in both the Royal Air Force and the Middlesex Regiment of the British Army. He began writing in 1945 and sold his first short story to a magazine called London Opinion. This experience helped him decide that he wanted to be a writer. He never thought of writing for children but, after producing a number of short stories and radio plays, his agent suggested that he adapt a television play for children.