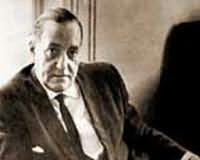 (Alejo Carpentier y Valmont)
Cuba (1904 - 1980)
Perhaps Cuba's most important intellectual figure of the twentieth century, Alejo Carpentier was a novelist, a classically trained pianist and musicologist, a producer of avant-garde radio programming, and an influential theorist of politics and literature. Best known for his novels, Carpentier also collaborated with such luminaries as Igor Stravinsky, Darius Milhaud, Georges Bataille, and Antonin Artaud. Born in Havana, he lived for many years in France and Venezuela but returned to Cuba after the 1959 revolution.
Novels
The Kindgom of This World (1949)
The Lost Steps (1953)
The Chase (1956)
Explosion in a Cathedral (1963)
Baroque Concerto (1974)
Reasons of State (1976)
The Harp and the Shadow (1978)