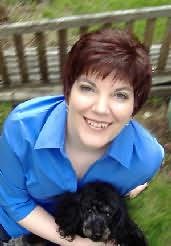 When her dreams of becoming a ballerina were quashed by early-onset klutziness, Diana Duncan took up the safer vocation of writing. Her first thrilling masterpiecewritten in orange crayonwas titled Perky the Kitten, and became an instant bestseller with her grandparents.


Her childhood growing up as a military brat gave her ability to leap into a conversation with anyone, anywhere, anytimeand she always discovers a new friend in the process. This gift of gab perfectly equipped her for a career that involves making stuff up.


Di is famous for using seven words when one will do. She wields smart-assery like a samurai sword, and will be the first to volunteer in a catastrophe. Of course, she was probably the one who caused the catastrophe.

Shes fiercely loyal to her friends and familybut in the event of the upcoming zombie apocalypse, she wont hesitate to use them as human shields.

She loves her job as an author, and claims writing is the most fun shes ever had while wearing her sock monkey pajamas. She also enjoys gardening, cooking, and adopting abandoned curbside furniture to refurbish into treasures.