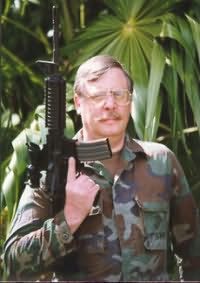 Kevin Dockery is an American fiction and nonfiction author and military historian. He is best known for his work detailing the history and weapons of the Navy SEALs. He served in the US Army on the Presidents Guard, and as an armorer. Since retiring from the Army, he has worked as a curator for the SEAL Museum in Fort Pierce, Florida, an historian, a game designer and as a lecturer. He has written 39 books, appeared in a number of television documentaries and served as technical advisor for several motion pictures. He has written with or for several well-known figures, including Bill Fawcett, Jesse Ventura, Harry Humphries, Dennis Chalker and several other Navy SEALs.