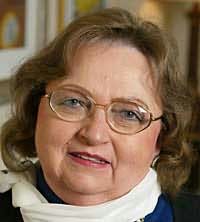 (b.1936)
Jean Marie Untinen Auel is an American writer, better known as Jean M. Auel. She is best known for her Earth's Children books, a series of historical fiction novels set in prehistoric Europe that explores interactions of Cro-Magnon people with Neanderthals. Her books have sold 34 million copies world-wide in many translations.

Grania (1986)
Morgan Llywelyn
"Grania is Morgan Llywelyn's best book yet. Her characters spring instantly to life and the reader remains captivated from first page to last."

She Who Remembers (1988)
(Time Circle, book 1)
Linda Lay Shuler
"The novel of America's prehistory... I loved this compelling story. It would not let me go!"

A Gift Upon the Shore (1990)
M K Wren
"Above all, it is a poignant expression of the durability, grace, and potential of the human spirit."

Circle of Stars (2001)
(Druid Circle, book 2)
Anna Lee Waldo
"Anna Lee Waldo's exciting story of persecuted Druids sailing west and establishing a colony among the native people of early Florida is a fascinating and dramatic portrayal of an intriguing concept that has tantalized researchers for years--the early contacts between Europe and the Americas. With impressive research and well-drawn, believable characters, the distinct nature of the two cultures is clearly portrayed and gives a little realized global view to the mysterious Druids and the prehistoric Americans. The story is enthralling and the suspense is delicious, one can hardly wait for Madoc and Cougar to meet."

Dreaming the Eagle (2002)
(Boudica, book 1)
Manda Scott
"A powerful novel, alive with the love, deceit, wisdom and the heroics of humanity."

Ironfire (2003)
David Ball
"Crowded with events that both forecast and mirror the conflicts of today... Ball's wealth of realistic detail and depth of characterization bring to vivid life this exciting 16th-century historical adventure. I couldn't put it down, and thought about it for days later."