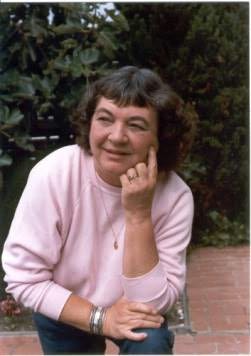 (b.1925)
Anna Lee Waldo wrote the best-selling historical novel, SACAJAWEA. Her interest in the subject began as a child when she collected spear points on the shores of Whitefish Lake in Montana and listened to stories of Blackfeet and Crow grandmothers.

It took her ten years to write about the first woman to go with a military contingent, with a baby in a cradleboard, half way across the North American continent. Anna Lee is now writing a sequence of books that began in Wales in the twelfth century called the DRUID CIRCLE series. These books are based on the elusive history of the son of Prince Owain Gwynedd, named Madoc, who came to America in 1170.
Series
Druid Circle
1. Circle of Stones (1999)
2. Circle of Stars (2001)