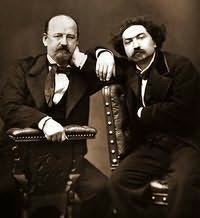 Both Erckmann and Chatrian were born in the département of Moselle, in the Lorraine region in the extreme north-east of France. They specialised in military fiction and ghost stories in a rustic mode, applying to the Vosges mountain range and the Alsace-Lorraine region techniques inspired by story-tellers from the Black Forest. Lifelong friends who first met in the spring of 1847, they finally quarreled during the mid-1880s, after which they did not produce any more stories jointly. During 1890 Chatrian died, and Erckmann wrote a few pieces under his own name.

Many of Erckmann-Chatrian's works were translated into English by Adrian Ross.

Tales of supernatural horror by the duo that are famous in English include "The Wild Huntsman" (tr. 1871), "The Man-Wolf" (tr. 1876) and "The Crab Spider." These stories received praise from the renowned English ghost story writer, M. R. James, as well as H. P. Lovecraft.

Erckmann-Chatrian wrote numerous historical novels, some of which attacked the Second Empire in anti-monarchist terms. Partly as a result of their republicanism, they were praised by Victor Hugo and Émile Zola, and fiercely attacked in the pages of Le Figaro. Gaining popularity from 1859 for their nationalistic, anti-militaristic and anti-German sentiments, they were well-selling authors but had trouble with political censorship throughout their careers. Generally the novels were written by Erckmann, and the plays mostly by Chatrian.
Collections
Stories of the Rhine (1870)
The Forest House (1871)
Popular Tales and Romances (1872)
Confessions of a Clarinet Player (1874)
The Man-Wolf (1876)
The Wild Huntsman (1877)
Strange Stories (1880)
The Best Tales of Terror of Erckmann-Chatrian (1980)
The Invisible Eye (2018)