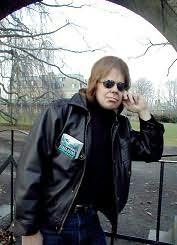 aka James Axler
Mark Ellis is a novelist who resides in Newport, Rhode Island with his wife of 28 years, Melissa Martin. Before becoming a full-time freelance writer in 1986, Ellis worked as a journalist, advertising copywriter and refrigeration engineer.

In the mid-to-late 1980s he worked as the primary writer for Adventure Publications' line of comic magazines, scripting such diverse titles as Ninja Elite, Warriors, and Star Rangers, working with legendary comics artist Jim Mooney on the latter title.

Ellis also created and scripted the Death Hawk series that featured the first published full-length work of fan-favorite artist, Adam Hughes.For other comics publishers he wrote The Justice Machine and THUNDER Agents as well as short stories for the occasional anthology, such as the highly-regarded "A Trip To Necropolis", penciled and inked by Jim Mooney.

In the early 1990s, Ellis served a three year stint as the editor of Millennium Publications, interfacing with Anne Rice, Doug Wildey, Frank Frazetta and other well known members of the science-fiction/fantasy creative community.

In his editorial capacity, Ellis gave now-established comics artists such as Mike Wieringo and Darryl Banks their first steady exposure.

He also worked with comics legends Jim Mooney and Don Heck on a number of projects, including H. P. Lovecraft's Cthulhu: The Whisperer in Darkness, which featured the first appearance of The Miskatonic Project, and Lakota.

He conceived and scripted the critically-acclaimed Nosferatu: Plague of Terror, a four-part series which provided a complete story of the title character's origin quite apart from the Dracula legend.

During his time with Millennium, teamed with Darryl Banks, Ellis scripted a four-part series based on The Wild Wild West TV series, the plot of which was optioned for feature film development, and Doc Savage: The Monarch of Armageddon, a four-part limited series which is considered to be the best and most faithful of the many comic adaptations of that classic character.

The Comics Buyer's Guide Catalog of Comic Books refers to the Ellis/Banks treatment as the one "to come closest to the original, capturing all the action, humanity and humor of the original novels."

Ellis also adapted The Man from U.N.C.L.E. and the cult-classic horror film It! The Terror from Beyond Space into comics.

Under the pen-name of James Axler, Ellis created the popular Outlanders series for Harlequin Enterprises's Gold Eagle imprint, the first novel of which appeared in 1997.

Now in its 12th consecutive year of publication, Outlanders has sold over a million books, making it one of the most successful mass-market paperback series of the last 20 years.

With his wife Melissa Martin, he wrote The Everything Guide To Writing Graphic Novels. They formed Millennial Concepts, their own graphic novel publishing imprint, working in tandem with Transfuzion Publishing.

They are also the founders and moderators of The Newport Round Table writer's group.