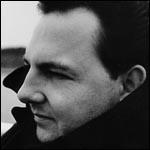 (b.1967)
Giles Foden, who grew up in Africa, was for three years an assistant editor of the Times Literary Supplement and then joined the staff of the Guardian. In 1998 Foden won the Whitbread First Novel Award for the Last King of Scotland, which was followed in 1999 by Ladysmith - two novels which, according to Alan Massie writing in the Scotsman, 'establish him as the most original and interesting novelist of his generation'.

In the Place of Fallen Leaves (1993)
Tim Pears
"'Long in abeyance, the English rural novel flourishes again in Tim Pears' story of a 13-year-old Devon farmgirl's confrontation with sex, death and the weather... an unusually welll-made novel which, through being less English than one would expect, produces a very English kind of magic."

Nowhere Man (2002)
Aleksandar Hemon
"His language sings... I should not be surprised if Hemon wins the Nobel Prize at some point"

The Irregular (2017)
(Irregular Spy, book 1)
H B Lyle
"H.B. Lyle has found the golden thread between Bond and Holmes in a thriller which engages on every page."