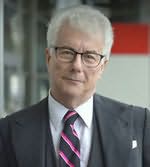 aka Martin Martinsen, Simon Myles, Bernard L Ross, Zachary Stone
Ken Follett was only twenty-seven when he wrote Eye of the Needle, the award-winning novel which became an international bestseller and a distinguished film. Before that, he had been a newspaper reporter and a publishing executive after studying philosophy at University College, London. He has since written ten equally successful novels and the non-fiction bestseller, On Wings of Eagles. Ken Follett lives with his family in London and Stevenage.

Shell Game (1985)
Douglas Terman
"A first-class thriller. It marks the coming-of-age of a great suspense novelist."

Kabul (1986)
M E Hirsh
"A magnificent evocation of the romance, the cruelty, the tragedy, and the passion of Afghanistan. Spellbinding."