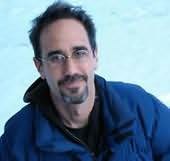 Paul La Farge is the author of four novels: The Night Ocean, forthcoming from Penguin Press in March, 2017; The Artist of the Missing (FSG, 1999), Haussmann, or the Distinction (FSG, 2001), and Luminous Airplanes (FSG, 2011); and a book of imaginary dreams, The Facts of Winter (McSweeney's Books, 2005). He is the grateful recipient of a Guggenheim Fellowship, the Bard Fiction Prize, and fellowships from the New York Foundation for the Arts and the National Endowment for the Arts. He was a fellow at the Dorothy and Lewis B. Cullman Center for Scholars and Writers at the New York Public Library in 2013-14. He lives in a subterranean annex in upstate New York, where he is almost certainly up to no good.
Genres: Historical
Novels
The Artist of the Missing (1999)
Luminous Airplanes (2011)
Haussmann, or the Distinction (2014)
The Night Ocean (2017)

Nothing Can Hurt You (2020)
Nicola Maye Goldberg
"Nothing Can Hurt You is a beautifully crafted novel with a terrifying story to tell. It's about a murder, and yes, there's a serial killer lurking, but the scariest thing here is the way that violence and violation shade their way into innocence and normality. This is one of those novels that makes you take a hard look at everything, starting with yourself. I couldn't put it down."