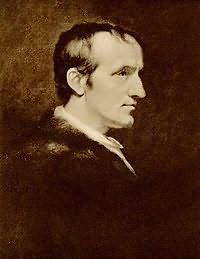 (1756 - 1836)
Father of Mary Shelley
in 1756, William Godwin was born in England, the son and grandson of strait-laced Calvinist ministers. Strictly-raised Godwin followed in paternal footsteps, becoming a minister by age 22. His reading of atheist d'Holbach and others caused him to lose both his belief in the doctrine of eternal damnation, and his ministerial position. Through further reading, Godwin gradually became godless. He promoted anarchism (but not anarchy). His Political Justice and The Enquirer (1793) argued for morality without religion, causing a scandal. He followed that philosophical book with a trail-blazing fictional adventure-detective story, Caleb Williams (1794), to introduce readers to his ideas in a popular format. Godwin, a leading thinker and author ranking in his day close to Thomas Paine, was enormously influential among famous peers.

He and Mary Wollstonecraft, author of A Vindication of the Rights of Woman, secretly married in 1797. She died tragically after giving birth to daughter Mary in 1797. Godwin's loving but candid biography of his wife, Memoirs of the Author of A Vindication of the Rights of Woman (1798), further scandalized society. Godwin, caring not only for the baby Mary, but her half-sister Fanny, remarried. He and his second wife opened a bookshop for children. Godwin, out of necessity, became a proficient author of children's books, employing a pseudonym due to his notoriety. His daughter Mary, at 16, famously ran off with poet Percy Shelley, whose Necessity of Atheism was influenced by Godwin. Mary's novel Frankenstein also paid homage to her father's views. Godwin's life was marked by poverty and further domestic tragedies. Godwin's prized manuscript attacked the Christian religion and was intended to free the mind from slavery. The Genius of Christianity Unveiled: in a Series of Essays was published only many years after his death. D. 1836.
Novels
Caleb Williams (1794)
St. Leon (1799)
Fleetwood (1975)
Damon and Delia (1988)

Anthologies containing stories by William Godwin
The Craft of Terror (1966)