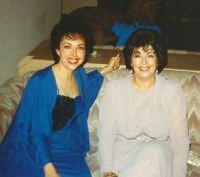 Kathryn Hockett is the pseudonym used by the mother/daughter writing team of Marcia (Vickery) Hockett and Kathy Kramer. The name Kathryn Hockett is a combination of both names. Originally Marcia aided her daughter in doing historical research but as time went on she also began to plot some of the stories. This "brainstorming" on various projects merges their experiences and points of view and brings more creativity to each story. In this case the saying "two heads are better than one has certainly proven to be true
The "Kathryns" bring a love of history to their writing. Kathryn's love is English and European history. They have written a total of 40 historical romance novels. These very accomplished romance writers are from the Rocky Mountain area of the United States - Boulder, Colorado. They have won the Romantic Times Reviewer's Choice Awards several years in a row. Marcia won the Romance Mother of the Year award.
Prior to writing, Kathy sang with a jazz band and devoted her time to music via theater, teaching and singing professionally. She attended the University of Colorado College of Music on a music scholarship. She added modeling to her itinerary when she modeled as the heroine for the cover of her novel, LADY ROGUE. Marcia was also a model prior to her marriage and family-raising career and was also an alumni of the University of Colorado.