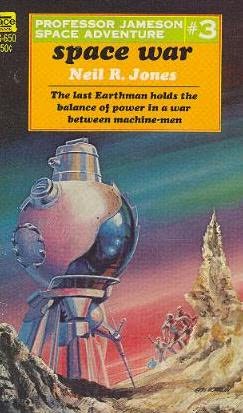 The Zoromes had found a way to immortality and thereby were able to set out on a centuries-long explorations of the entire galaxy. One among the Zoromes was a human, Professor Jamesom, last man of Earth, and his adventures make a saga second to none. The Zoromes had made one mistake in their scientific history - they had helped another race of beings to change over into machine bodies - the Mumes of the world Mumed. But unlike Jameson, the Mumes did not join in fellowship with Zor. Rather instead they turned on their benefactors, schemed for greater power, and finally the two super-races of machine-men became the bitterest of enemies. In Space War, Professor Jameson finds himself in the thick of a war of the world.