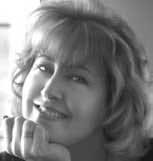 Multi-published Diana Killian is the author of the critically praised Poetic Death series featuring the adventures of an American teacher and her ex-jewel thief boyboyfriend in the English Lake District. In Spring 2008, CORPSE POSE, the first book in the new yoga-themed Mantra for Murder series will debut from Berkeley Prime Crime. Diana is the recipient of a Mystery Writers of America grant, and can be found blogging weekly on the notorious Good Girls Kill For Money Club, as well as the Cozy Chicks blog.