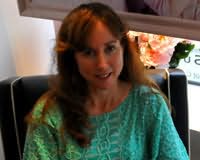 After graduating from UCLA with a degree in English Literature, I had no idea what I wanted to do with my life. But I did know I loved Jackson Browne, so I called up his record company and asked if they were hiring. Luckily for me, someone had just quit. Several years later, I got even luckier. I met a boy at a rooftop party in Chicago, and we became inseparable. After knowing him just three months, I packed up my Honda and left the only world Id ever known to embark on a wild adventure that has included 25 years of marriage, four kids, and nine moves around six states.