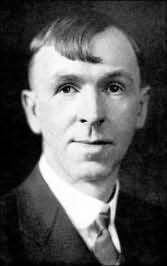 (1890 - 1967)
Born in Chicago in 1890, Keeler spent his childhood exclusively in this city, which was so beloved by the author that a large number of his works took place in and around it. In many of his novels, Keeler refers to Chicago as "the London of the west." The expression is explained in the opening of Thieves' Nights (1929):

"Here ... were seemingly the same hawkers ... selling the same goods ... here too was the confusion, the babble of tongues of many lands, the restless, shoving throng containing faces and features of a thousand racial castes, and last but not least, here on Halsted and Maxwell streets, Chicago, were the same dirt, flying bits of torn paper, and confusion that graced the junction of Middlesex and Whitechapel High streets far across the globe."

Other locales for Keeler novels include New Orleans and New York. In his later works, Keeler's settings are often more generic settings such as Big River, or a city in which all buildings and streets are either nameless or fictional. Keeler is known to have visited London at least once, but his occasional depictions of British characters are consistently implausible.