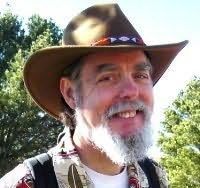 (b.1948)
T. Jackson King (Tom) is a professional archaeologist and journalist. He writes hard science fiction, anthropological SciFi, dark fantasy/horror and contemporary fantasy/magic realism--but that didn't happen until he was 38.

Before then, college years spent in Paris and in Tokyo led Tom into antiwar activism, hanging out with some Japanese hippies and learning how often governments lie to their citizens. The latter lesson led him and a college buddy to publish the Shinjuku Sutra English language underground tabloid in Japan in 1967. That was followed by helping shut down the University of Tennessee at Knoxville campus in 1968 and a bus trip to Washington D.C. for the Second March on Washington where thousands demanded an end to the Vietnam War.