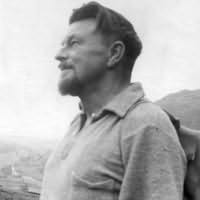 (1909 - 1957)
Malcolm Lowry was a British novelist and poet whose masterpiece Under the Volcano is widely hailed as one of the greatest novels of the twentieth century. Born near Liverpool, England, Lowry grew up in a prominent, wealthy family and chafed under the expectations placed upon him by parents and boarding school. He wrote passionately on the themes of exile and despair, and his own wanderlust and erratic lifestyle made him an icon to later generations of writers.
Novels
Ultramarine (1933)
Under the Volcano (1947)
Dark As the Grave Wherein My Friend Is Laid (1969)
October Ferry to Gabriola (1970)