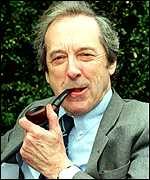 (1932 - 2000)
Sir Malcolm Stanley Bradbury CBE was an English author and academic. He is best known to a wider public as a novelist. Although he is often compared with David Lodge, his friend and a contemporary as a British exponent of the campus novel genre, Bradbury's books are consistently darker in mood and less playful both in style and language. His best known novel The History Man, published in 1975, is a dark satire of academic life in the "glass and steel" universities the then-fashionable newer universities of England that had followed their "redbrick" predecessors which in 1981 was made into a successful BBC television serial. The protagonist is the hypocritical Howard Kirk, a sociology professor at the fictional University of Watermouth.
Novels
Eating People Is Wrong (1959)
Stepping Westward (1965)
The History Man (1975)
Rates of Exchange (1983)
Why Come to Slaka? (1986)
Cuts (1987)
Doctor Criminale (1992)
To the Hermitage (2000)

Coming from Behind (1983)
Howard Jacobson
"A very funny, bitterly intelligent novel... do read it."

Soldiers and Innocents (1990)
Russell Celyn Jones
"A truly striking portrait of the impact of military life and discipline on a man who has other qualities buried beneath his hard surface. The book itself is similarly hard-edged but moving, and by a writer of obvious talent."

Damascus Nights (1993)
Rafik Schami
"Timely and timeless at once."

A Way in the World (1994)
V S Naipaul
"His own modern labour of love, loss and disquiet, this really is a book to treasure."