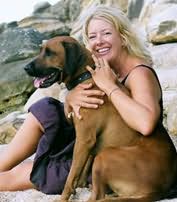 Belinda Murrell is a bestselling, internationally published children's author with a legion of loyal fans and a history of writing in her family that spans over 200 years. After studying Literature at Macquarie University, Belinda worked as a travel journalist, editor and technical writer. A few years ago, she began writing stories for her own three children - Nick, Emily and Lachlan.

Her 21 books include The Sun Sword fantasy trilogy as well as a newly-released Lulu Bell series for younger readers. She is also known for her collection of other timeslip tales including The Sequin Star, The River Charm, The Locket of Dreams, The Forgotten Pearl, The Ruby Talisman and The Ivory Rose, which have been recognised by various awards, including Honour Book KOALAS 2013, shortlisted KOALAS 2011, and 2012, CBCA Notable List and highly commended in the PM's Literary Awards.

Belinda spent  two years travelling with her family. The trip included five months traveling in Europe and an 18 month journey around Australia in a caravan. Belinda home schooled her three children while researching and writing The Locket of Dreams and The Ruby Talisman.