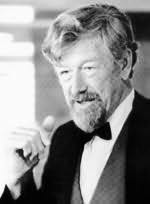 (1912 - 1994)
Manfred was born in Doon, Iowa. He was baptized Frederick Feikes Feikema, VII, and he used the name Feike Feikema when he published his first books. According to Alvin Plantinga, Manfred thought that he would have a hard time being taken seriously by the Eastern establishment with a name like "Feike Feikema", so he elected to change his name to Frederick Manfred. He was the individual who coined the immediate area around his home area of Sioux City, Iowa, Siouxland.

From 1942 - 1943 he was a patient at Glen Lake Sanatorium in Minnesota. He met his future wife, Maryanna Shorba, at the sanatorium. He fictionalized this period in his book, Boy Almighty published under Feike Feikema.

For a time he lived in a house which is now the interpretive center of Blue Mounds State Park in Rock County, Minnesota. He attended Calvin College in Michigan.
Series
Wanderlust
1. The Primitive (1949)
2. The Brother (1950)
3. The Giant (1951)