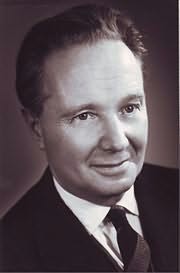 France (1908 - 2004)
Born in Tebessa located in ,what was then, the French colony of Algeria. Robert Merle and his family moved to France in 1918. Merle wrote in many styles and won the Prix Goncourt for his novel Week-end à Zuydcoote. He has also written a 13 book series of historical novels, Fortune de France. Recreating 16th and 17th century France through the eyes of a fictitious Protestant doctor turned spy, he went so far as to write it in the period's French making it virtually untranslatable.

His novels Un animal doué de la raison (A Sentient Animal, 1967), a stark Cold War satire inspired by John Lilly's studies of dolphins and the Caribbean Crisis, and Malevil (1972), a post-apocalyptic story, were both translated into English and filmed, the former as Day of the Dolphin. The film The Day of the Dolphin bore very little resemblance to Merle's story.