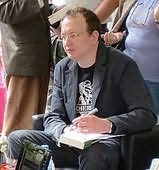 (b.1972)
Robert Muchamore was born in Islington, London in 1972. He still lives there, and worked as a private investigator up until 2005 and the critically-accepted release of Maximum Security.

The Hunger Games phenomenon is part of the huge YA / Children's book explosion that has grown, thanks to the British Rat pack of YA authors, Anthony Horowitz, Robert Muchamore, Joe Craig and Charlie Higson. We owe much of the hunger games sucess to authors like Robert.

Robert was inspired to create the CHERUB series by his nephews' complaints about the lack of anything for them to read. CHERUB: The Recruit was Robert's first book and won the Red House Children's Book Award 2005 in the Older Readers Category.

Following the last book in the CHERUB series, it was revealed that a trilogy would be released starting from August 2011 that will focus on a new set of CHERUB agents centred upon Ryan Sharma and also involve an sixteen year old Lauren Adams. The first book will be called People's Republic.