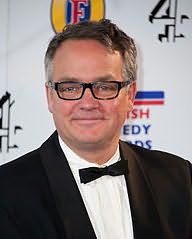 (b.1958)
Charlie Higson is a successful author, actor, comedian and writer for television and radio.

He wrote the phenomenally successful Young Bond series which has now sold over a million copies in the UK and has been translated into over 24 different languages. The series began with SilverFin and was followed by Blood Fever, Double or Die, Hurricane Gold and By Royal Command. All five novels entered the children’s bestseller charts in the top five.

Charlie is a huge fan of horror films and books, and even studied gothic literature at university. With three sons of his own, Charlie knows exactly how to terrify and captivate teenagers in equal measure.

After leaving university, Charlie formed a band, The Higsons. He then became a decorator before turning to the world of television and going into partnership Paul Whitehouse. His television successes have included Saturday Live, the Harry Enfield Television Programme, The Smell of Reeves and Mortimer, Shooting Stars, Randall and Hopkirk Deceased, the film Suite 16, Swiss Toni and of course, the Fast Show.

No Such Thing As Dragons (2009)
Philip Reeve
"His books are full of adventure, humour and invention."

Beside the Syrian Sea (2018)
James Wolff
"Great characters, convincing detail and a compelling story. All too human MI5 desk jockey, Jonas, is no James Bond but he manages to stay one step ahead of his ex-employers, the CIA, Hezbollah, Isis and the reader right up until the final showdown in the desert."