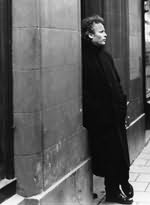 Sweden (b.1955)
Klas Östergren is a Swedish novelist, screenwriter and translator. Östergren's first book, Attila was published in 1975 but he received his big breakthrough in 1980 with Gentlemen. He has also written for film and TV like Veranda för en tenor. As a translator he has worked with J.D. Salinger's The Catcher in the Rye and translated Henrik Ibsen's plays in two volumes, which was published in September 2008. In 2005, Östergren received De Nios grand prize.