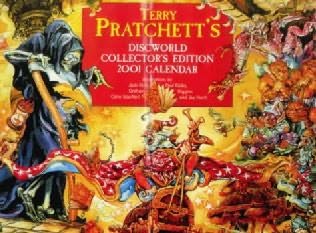 For those suffering from withdrawal symptoms as they endure the 12-month wait between new Discworld novels, this could help alleviate the tension. All right, so it's not a new story, but Pratchett fans will find plenty to keep them entertained throughout the long year. This collectors' edition calendar features beautiful artwork from Josh Kirby, Paul Kidby, Graham Higgins, Colin MacNeil and Jay Hurst. It features some stunning interpretations of classic Pratchett stories and events. Particular highlights include September's stunning version of Small Gods by Jay Hurst. The giant glowing deities towering over a beach strewn with dead bodies and wrecked boats reminding us that, despite Pratchett's penchant for comedy, there is, underneath, a darker tone to some of his works. The artwork is colourful and detailed and while some of the paintings may be familiar to hard-core Discworld fans, the razor-sharp reproduction means it will look fabulous on any wall. --Jonathan Weir