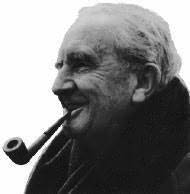 (1892 - 1973)
Brother of Hilary Tolkien, Grandfather of Simon Tolkien
John Ronald Reuel Tolkien was born on the 3rd January, 1892 at Bloemfontein in the Orange Free State, but at the age of four he and his brother were taken back to England by their mother. After his father's death the family moved to Sarehole, on the south-eastern edge of Birmingham. Tolkien spent a happy childhood in the countryside and his sensibility to the rural landscape can clearly be seen in his writing and his pictures.

His mother died when he was only twelve and both he and his brother were made wards of the local priest and sent to King Edward's School, Birmingham, where Tolkien shone in his classical work. After completing a First in English Language and Literature at Oxford, Tolkien married Edith Bratt. He was also commissioned in the Lancashire Fusiliers and fought in the battle of the Somme. After the war, he obtained a post on the 'New English Dictionary' and began to write the mythological and legendary cycle which he originally called 'The Book of Lost Tales' but which eventually became known as 'The Silmarillion'.

In 1920 Tolkien was appointed Reader in English Language at the University of Leeds which was the beginning of a distinguished academic career culminating with his election as Rawlinson and Bosworth Professor of Anglo-Saxon at Oxford. Meanwhile Tolkien wrote for his children and told them the story of 'The Hobbit'. It was his publisher, Stanley Unwin, who asked for a sequel to 'The Hobbit' and gradually Tolkien wrote 'The Lord of the Rings', a huge story that took twelve years to complete and which was not published until Tolkien was approaching retirement. After retirement Tolkien and his wife lived near Oxford, but then moved to Bournemouth. Tolkien returned to Oxford after his wife's death in 1971. He died on 2 September 1973 leaving 'The Silmarillion' to be edited for publication by his son, Christopher.

Zimiamvia (1992)
(Zimiamvia)
E R Eddison
"The greatest and most convincing writer of invented worlds I have read."