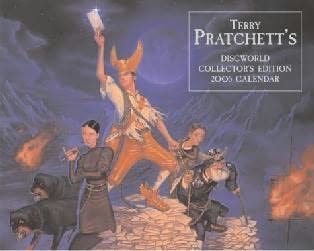 The annual treat for all Discworld fans: a sumptuously illustrated wall calender featuring favourite Discworld artists This year more award-winning illutsrators give us their own unique interpretations of Terry Pratchett's phenomenal Discworld. Each full-page illustration also appears on the back; there are biographies of the artists as well as the author on the inside front page. The calendar dates are exhaustively researched and include major real-time calendrical data for the UK, Australia, New Zealand, Canada and the United States. Artists to be briefed will include Edward Miller, Les Edwards, Sandy Nightingale, Jackie Morris, David Frankland, David Wyatt, and, of course, Paul Kidby, Terry Pratchett's favourite portrayer of the Discworld. And, for the first time, Terry Pratchett himself will select twelve of his favourite scenes to be illustrated.