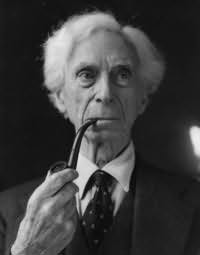 (1872 - 1970)
Bertrand Arthur William Russell, 3rd Earl Russell, OM, FRS, was a Welsh philosopher, historian, logician, mathematician, advocate for social reform, pacifist, and prominent rationalist. Although he was usually regarded as English, as he spent the majority of his life in England, he was born in Wales, where he also died.

He was awarded the Nobel Prize in Literature in 1950 "in recognition of his varied and significant writings in which he champions humanitarian ideals and freedom of thought."
Collections
Nightmares of Eminent Persons (1954)

Professor Mmaa's Lecture (1953)
Stefan Themerson
"I recommend this book to the reader because it is massive, impressive, and grimly amusing. I cannot promise the reader that at any point he will shake his sides with laughter, but I can promise him a wry pleasure to be derived from the skilful dissection of folly."
Visitors to this page also looked at these authors
Stefan Themerson
Annabel Pitcher
Bernard Cornwell
Elizabeth Ann Scarborough
Hope Mirrlees
Richard Middleton
Arthur Machen
Henry James
E R Eddison
Lord Dunsany
L Sprague de Camp
Bernard Capes
James Branch Cabell