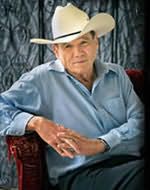 (b.1936)
Father of Alafair Burke, cousin of DeLauné Michel and Andre Dubus III
James Lee Burke's work has been awarded an Edgar twice for Best Crime Novel of the Year. He has also been a recipient of a Breadloaf and Guggenheim Fellowship and an NEA grant. Two of his novels, Heaven's Prisoners and Two For Texas, have been made into motion pictures. His short stories have been published in The Atlantic Monthly, New Stories from the South, Best American Short Stories, Antioch Review, Southern Review, and The Kenyon Review. His novel The Lost Get-Back Boogie was rejected 111 times over a period of nine years, and upon publication by Louisiana State University press was nominated for a Pulitzer Prize.

Today he and his wife live in Missoula, Montana, and New Iberia, Louisiana.

A Matter of Honor (1997)
Eugene Izzi
"A great talent... a natural-born storyteller."

House of Sand and Fog (1999)
Andre Dubus III
"One of the best American novels I've ever read-A stunning book-No one who reads this novel will ever forget it. I have never felt so strongly about the talent of a young writer in my life."

Shadow Men (2004)
(Max Freeman, book 3)
Jonathon King
"In Shadow Men, Jonathon King captures the intrigue, lyrical beauty and darkness of the Florida Everglades better than any other writer I know."

Waiting for the Evening News (2010)
Tim Gautreaux
"This man is a wonderful writer... he always captures the heart."

Desperation Road (2017)
Michael Farris Smith
"Every once in a while an author comes along who's in love with art and the written language and image, William Faulkner and Cormac McCarthy and Annie Proulx. You can add Michael Farris Smith s name to the list."

Presidio (2018)
Randy Kennedy
"Randy Kennedy writes wonderful prose. He combines the detail and eye of a journalist with the lyricism of a poet. If you want to read about the real deal down in Texas, he's your man."

Fade to Grey (2019)
John Lincoln
"John Lincoln writes with conscience and with passion about social injustice, and he understands how society and the system actually work."