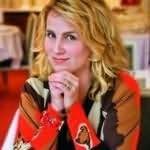 Jo Rees grew up in Chelmsford before getting an English and Drama degree at Goldsmiths' College. After several bizarre jobs, including running her own sandwich delivery business and writing promotions for the back of Sugar Puffs boxes, It Could Be You, was published in 1997 under her maiden name, Josie Lloyd, and enabled her to meet fellow novelist, Emlyn Rees. Together they wrote Come Together, a twenty-something rom-com, which became a number one Sunday Times bestseller and was translated into 26 languages. They went on to co-write six more successful novels, and along the way got married and had three kids. In 2007 Jo went solo and wrote Platinum, followed by Forbidden Pleasures in 2010. Jo also writes a light-hearted blog about her life as a novelist and mother in Brighton called mumwritesbooks.com, which was in the top ten Times mummy blogs.