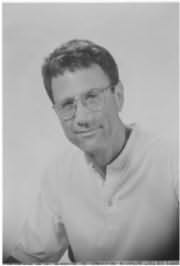 (b.1945)
Since 1971, John has lived in Putnam County, Indiana, currently on a small farm southeast of Greencastle. Throughout those years he has worked as a teacher, football coach , quality control foreman, carpenter, and wood-splitter. From 1979-1997 he assisted James R. Gammon of DePauw University with Gammon's landmark research on the Wabash River. Presently, as he has done for the past twenty years John works as a researcher for the DePauw University Archives.

John is author of 13 books in the Garth Ryland mystery series, several published articles, and the Bicentennial History bulletins for the Indiana United Methodist Church. His works in progress include a Garth Ryland mystery and Me ,Darst, and Alley Oop Walking the Dog, both memoirs. River Rats, a coming of age novel, set along the Wabash River in the 1950's.