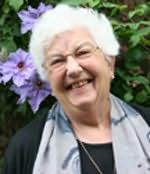 After emigrating to Montreal from England in the 1950s, Gwen Southin was a home-maker, raised four children, then worked as secretary to the CEO of an international telephone company until she and her husband decided to abandon Quebec winters in favor of the temperate Sunshine Coast north of Vancouver. Long involved in writers' circles and writing workshops, she also helps organize various book festivals in her community.
Series
Margaret Spencer
1. Death in A Family Way (2000)
2. In the Shadow of Death (2002)
3. Death On a Short Leash (2008)
4. Death as a Last Resort (2009)
5. Death as a Fine Art (2012)
6. Death Plays With Fire (2020)