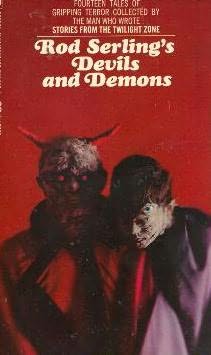 (1967)
An anthology of stories edited by Rod Serling

This contains: The Montavarde Camera by Avram Davidson; The Coach by Violet Hunt; Adapted by Carol Emshwiller; Death Cannot Wither by Judith Merril; The Story of the Goblin Who Stole a Sexton by Charles Dickens; Pollock and the Porroh Man by H. G. Wells; Stars Won't You Hide Me by Ben Bova; The Bottle Imp by Robert Louis Stevenson; The Adventure of the German Student by Washington Irving; The Four Fifteen Express by Amelia B. Edwards; The Blue Sphere by Theodore Dreiser; The Bisara of Pooree by Rudyard Kipling; A Time to Keep by Kate Wilhelm; and Brother Coelestin by Emil Frida.