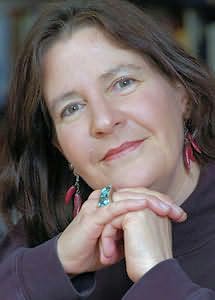 aka Pari Noskin
Pari Noskin Taichert hails from Albuquerque and has worked as a belly-dancing instructor, textbook sales consultant, and waitress--among her more respectable jobs. She earned her B.A with Distinction in Far Eastern Languages & Literature and masters of Social Work in Transcultural Therapy from the University of Michigan. Unable to sit still for very long, Pari has traveled to--and lived in--enough places to have the good sense to finally come home. Among her longer adventures were a year as a foreign exchange student to Tours, France while in high school and a little under a year of study at the Chinese University of Hong Kong while in college.

A national award-winning journalist, Pari has written freelance features for Crosswinds Weekly, Albuquerque, The Magazine, and Mystery Scene Magazine as well as a monthly literary column for the Albuquerque Tribune. She also maintains a small public relations consulting business.

In December 2005, Pari Noskin Taichert earned her blue belt in Tae Kwon Do with a mean side kick that cracked through three boards. This same strength and determination has seen her through years of rejection and struggle until her first book, THE CLOVIS INCIDENT, was published in 2004.

Pari married late, had children even later, and loves Guinness, Glenlivet and strong coffee. When she isn't punching or defending against her black belt husband and colored belt children, she's writing.
Series
Sasha Solomon
1. The Clovis Incident (2004)
2. The Belen Hitch (2005)
3. The Socorro Blast (2008)