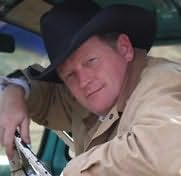 (b.1961)
Craig Johnson is the New York Times bestselling author of twelve Walt Longmire mystery novels, which are the basis for Longmire, the hit Netflix original drama. The Cold Dish won Le Prix du Polar Nouvel Observateur/Bibliobs. Death Without Company, the Wyoming Historical Associations Book of the Year, won Frances Le Prix 813, and Another Mans Moccasins was the Western Writers of Americas Spur Award Winner and the Mountains & Plains Book of the Year. The Dark Horse, the fifth in the series, was a Publishers Weekly Best Book of the Year and Junkyard Dogs won The Watson Award for a mystery novel with the best sidekick. Hell Is Empty, selected by Library Journal as the Best Mystery of the Year, was a New York Times best seller, as was As the Crow Flies, which won the Rocky for the best crime novel typifying the western United States. A Serpents Tooth opened as a New York Times bestseller as did Any Other Name and Wait for Signs, Johnson's collection of short stories. Spirit of Steamboat was selected by the State Library as the inaugural One Book Wyoming and included visits to sixty-three libraries. Johnson lives in Ucross, Wyoming, population twenty-five.

A Player to be Maimed Later (2013)
(Lloyd Keaton Mystery, book 2)
John Billheimer
"...the most exciting play in crime fiction."

Shotgun Moon (2013)
K C McRae
"Shotgun Moon is easy on the ear and the eyeâ€”definitely an author and a character to watch out for."

Spider Woman's Daughter (2013)
(Leaphorn, Chee and Manuelito, book 1)
Anne Hillerman
"Chip off the literary block-there are a lot of things Tony taught is daughter, Anne, and one of them was how to tell a good story. Spider Woman’s Daughter is a proud addition to the legacy, capturing the beauty and breath of the Southwest as only a Hillerman can."

Glorious (2014)
(Cash McLendon, book 1)
Jeff Guinn
"If, like me, youâ€™ve been waiting for the next Louis Lâ€™Amour or Zane Grey, the good news is his name is Jeff Guinn."

Pine Marten (2015)
Wallace J Swenson
"This is as finely written a western as is out there."

The Far Empty (2016)
(Sheriff Chris Cherry, book 1)
J Todd Scott
"So good I wish I'd written it. The poetic and bloody ground of west Texas has given birth to a powerful new voice in contemporary western crime fiction."

Knottspeed (2017)
Jeff Johnson
"The bastard lovechild of Charles Bukowski and Raymond Chandler, Lucky Supreme is a novel so good you'll want to ink it into your skin."

Fateful Mornings (2017)
(Henry Farrell, book 2)
Tom Bouman
"You would be hard-pressed to find a finer new series than Tom Bouman’s Henry Farrell novels because of the complexity of the plots or the richness of the characters, but what it really comes down to is just damn good writing."

Somebody's Daughter (2018)
David Bell
"Somebody’s Daughter is both plausible and pulsating, a psychological thriller that hits perilously close to home."

Path of the Dead (2018)
(Arthur Nakai Mystery, book 1)
Mark Edward Langley
"Combining the gate of a fine horse, the comfort of your favorite Indian blanket, and the ease of a well-worn saddle, Mark Langley's (Path of the Dead) is one heck of a debut novel coming out of the gate."

Winter Counts (2020)
David Heska Wanbli Weiden
"One part gritty procedural, one part hard-edged literature, Winter Counts is more than a novel--it's a testament in napalm you won't be able to put down because it burns and holds fast."

The Tinderbox (2020)
Lou Diamond Phillips
"An amazingly prescient tale from one of the finest storytellers I know, The Tinder Box is an otherworldly adventure combining a much-loved fable with the sweep and grandeur of a startling, science-fiction epic."