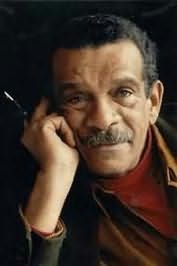 Saint Lucia (1930 - 2017)
Derek Walcott was a Caribbean poet, playwright, writer and visual artist. Born in Castries, St. Lucia, he won the Nobel Prize for Literature in 1992 "for a poetic oeuvre of great luminosity, sustained by a historical vision, the outcome of a multicultural commitment."

His work, which developed independently of the schools of magic realism emerging in both South America and Europe at around the time of his birth, is intensely related to the symbolism of myth and its relationship to culture. He is best known for his epic poem Omeros, a reworking of Homeric story and tradition into a journey around the Caribbean and beyond to the American West and London.

Walcott founded the Trinidad Theatre Workshop in 1959, which has produced his plays (and others) since that time. He also founded Boston Playwrights' Theatre at Boston University in 1981. In 2004, Walcott was awarded the Anisfield-Wolf Lifetime Achievement Award, and had retired from teaching poetry and drama in the Creative Writing Department at Boston University by 2007.