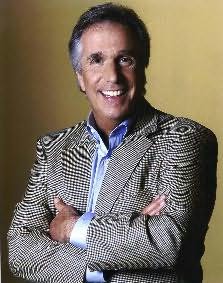 (b.1945)
When we hear the name Henry Winkler, most of us smile and remember the actor in the role of the Fonz on the 1970s sitcom "Happy Days." The guy in the leather jacket could summon women with a snap of the fingers, and he somehow made an office with a men's-room view the height of cool.

Winkler's been busy since then, to say the least -- he's continued to act in movies, on Broadway, and on television, and has also directed and produced. At present, he is a producer of television's "Hollywood Squares."

Winkler has also been writing books: he is the author, with Lin Oliver, of a new series of children's books called Hank Zipzer: The Mostly True Confessions of the World's Best Underachiever, published by the Grosset & Dunlap imprint of Penguin Putnam. The books feature whimsical illustrations by Carol Heyer that evoke the days of looseleaf paper and three-ring binders, and the amusing author biographies are fun, too.